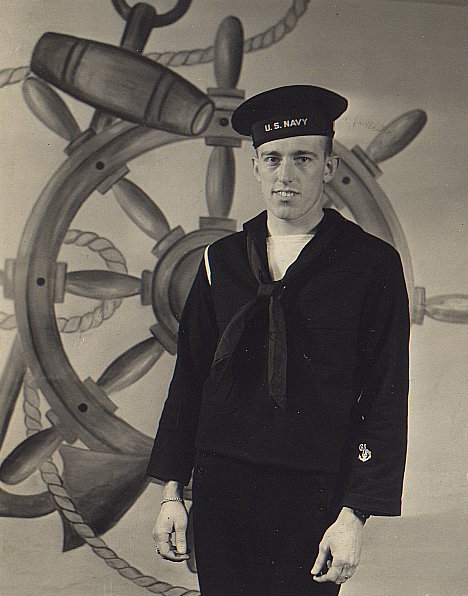 When Geissler first arrived at the Naval training center in Chicago, they lined up all the recruits at the deep end of a huge Olympic sized pool saying, “If you can make it to the other end of the pool somehow and not drown, then you’re in the Navy,” and then they pushed them all in.  Geissler said “I don’t know how to swim, just how to dog paddle,” but he made it to the other end!

Once he was in the Navy, someone found out that he had a degree from University of Illinois.  He applied for officer’s status and was assigned the rank of Lieutenant Jr. Grade.  He said it was really awkward having to salute officers one day and the next day other soldiers were saluting him!

Lieutenant Geissler transited on the USS Achernar to Pearl Harbor, stopped at Eniwetok, Kossol Roads, and anchored in San Pedro Bay, Philippine Islands, before arriving off Okinawa to support the seizure of that key island. While stationed off Okinawa the next day, Lieutenant Geissler was on duty on the bridge at night during an attack from Kamikaze planes.  Carl said that you could hear the planes coming in, but you couldn’t see them because it was very late at night and it was so dark.  He was the Gunnery Officer an ordered his colleagues to shoot but said:

“When you try to shoot those planes down, you have to shoot blindly, and when the Kamikazes get close, they will cut their engines, and glide in, so you can’t even hear where they are coming from. My gun mates shot some planes down, but one Japanese plane struck the attack cargo ship’s starboard side at 0043.  Normally, Kamikazes have explosives in their planes and they explode when they hit a ship, but this one skidded across the bow of the Achernar, and didn’t explode right away.  Its wheels got hung up on the side railing of the ship, and flipped over the side where it exploded and almost simultaneously, a bomb exploded on her port side killing several crew members who were sleeping in the bunks below deck. Fires broke out, and the ship began listing slightly to port. Achernar lost five crew members killed and 41 injured.”

Lieutenant Geissler’s leg received shrapnel from the explosion, and he was awarded the Purple Heart because of the wounds.  Since other sailors lost their lives, and he was one of the officers on duty at the time, he felt guilty about receiving the Purple Heart.  Carl blamed himself for not shooting that last plane down in time.

Because the ship was listing, they had to tilt it sideways in order to keep it from taking in water during repairs. When the battle was over and because Lieutenant Geissler was an officer, he was able to go ashore and look at all the weapons they found in Okinawa.  They were each allowed to take one item, and Geissler took a sword painted brown (perhaps painted for camouflage).

The Achernar remained at Okinawa for several weeks, when she sailed for the United States via Ulithi and Pearl Harbor. Achernar and Lieutenant Geissler then shuttled personnel and equipment between Japan, various other Pacific islands, and took part in “Magic Carpet” operations, returning veterans to the United States. Achernar received three battle stars for World War II service.

Carl didn’t like talking about the war; he said it was a terrible thing and he got off lucky.