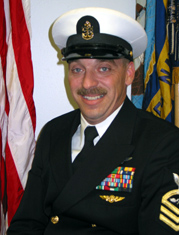 Deployed to the Arabian Gulf in support of Operation Desert Shield/Desert Storm.  While onboard USS Tripoli, the ship struck a floating Iraqi mine earning him a Combat Action Ribbon.

August 1999 – Assigned to Panama City, FL where he worked intensely with the Airborne Mine Neutralization System which culminated in him being the first Aircrewman to successfully detonate a live mine utilizing the system.

February 2003 to June 2003 – Deployed to Bahrain in support of the Global War on Terrorism and Operation Iraqi Freedom.  Played a key role in establishing a permanent detachment, bringing a Heavy-lift and Airborne Mine Countermeasures capability to the Northern Arabian Gulf.  Upon completion of this tour, he reported to HM-18 for duty as Command Chief.