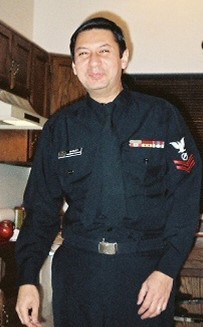 Christopher Basquez was born on February 28, 1950 in a small mining town of Trinidad, Colorado. After graduating high school in 1968, from Holy Trinity and Trinidad Catholic High, Chris entered the United States Navy, as a Boatswain’s mate. In 1971 he changed rate to Yeoman. His first duty assignment was as a crewman aboard the USS Richard S. Edwards (DD-950), where he participated in one of two Western Pacific deployments. As a member of this ship, Chris stood upper-level lookout watch. Chris’ second duty was aboard the ship USS Morton (DD-948), stationed out of Pearl Harbor, Hawaii. Chris got out of active duty as a YN3 in May of 1972 and joined the Naval Reserve, where he was attached to CINCUSNAVEUR, Det 118. Chief US Naval Forces Europe was a high-profile logistics unit with many Top-Secret personnel attached to the unit. Chris with his unit was activated and spent 7 months in London, England during Desert Storm.
He retired from the US Naval Reserve November, 2000 as a RM1. He spent the rest of his civilian career as a technician and engineer for Mountain Bell/US West and Qwest Communications.