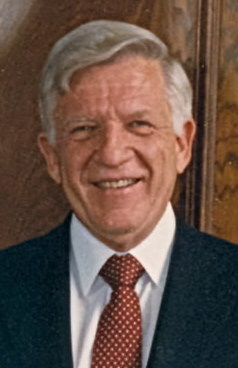 Jim was born in Fort Smith, Arkansas, and attended high school in Sherman, Texas, where he was know as a “math whiz” and played quarterback for the football team. Jim enlisted in the Marine Corps after high school in 1943.

Jim served with the historic 4th Marine Division in the Pacific during WWII. Jim was a communication lineman and was engaged in three epic battles for control of the Pacific beginning with the assault landing of Saipan, the largest island of the Mariana chain, on June 15, 1944. His next assault landing was on the neighboring island of Tinian on July 24, 1944. On February 19, 1945, Jim was in the third landing assault on Iwo Jima. He was wounded six days later from mortar shrapnel in his leg, and was awarded the Purple Heart.

After the war, Jim owned his own insurance company in San Francisco for ten years. He moved to Denver in 1952 and joined the Frank B. Hall insurance brokerage. where he became president and later chairman of the board for Frank B. Hall Colorado. Jim was a golf enthusiast and snow skier. He was a resident of Highlands Ranch since 1987 and is survived by his wife, Virginia.